You wake up, make coffee, and scan your DARPA-approved “digital certification sensor” to check into the government-mandated “permissioned” (centralized) blockchain.

Although it’s a bit invasive, the sensor has certainly made your life easier. All of those vaccine passports you had to carry around everywhere were getting tedious.

(Even better, according to the world’s top scientists, the sensor helps to filter any COVID variants out of your blood before symptoms begin.)

Your weekly check-ins, though, are getting more and more demanding.

As soon as you check in, your A.I. assistant gives you your updated social credit score.

“Starting now, your USDC wallet is being docked 32 credits each day,” she says, “until you reach a socially acceptable 600.”

She sends a checklist to your holographic retinas.

There are 93 things you can do to improve.

2.] Report to your closest SOCIAL EQUITY center for the latest wetware update on your NEURALINK.

“If you don’t do these three things by FRIDAY,” your virtual assistant says, “you won’t be able to access your virtual meeting room.”

Shucks, you think to yourself. Wouldn’t that be a shame to miss another pointless UN meeting.

“And if you don’t make your meetings,” your assistant goes on, detecting the sarcasm in your inner voice, “you’ll be banned from all recreation, social media, and entertainment for three weeks…

“Except, of course,” she adds, “for the required four hours of sponsored programming per day.”

This is, of course, just an idea I’m planning on pitching for the next season of Black Mirror…

In truth, the horrid scene above was inspired by an article Jim Rickards wrote called, In The Year 2024.

According to Rickards, he wrote it to alert readers to dangerous trends forming in society, “some of which,” Jim said, “are already in place.”

“As I awoke this morning, Sunday, Oct. 13, 2024, from restless dreams, I found the insect-sized sensor implanted in my arm was already awake. We call it a ‘bug.’ U.S. citizens have been required to have them since 2022 to access government health care.”

“The government could also monitor all of your transactions and digitally freeze your account if you disagreed with their tax or monetary policy. In fact, a new category of hate crime for ‘thoughts against monetary policy’ was enacted by executive order. The penalty was digital elimination of the wealth of those guilty of dissent.”

Back in 2014, in simpler times, this level of invasive tech seemed ridiculous. Alas, how quickly the fringes tend to move toward the center these days.

Some of us have it worse than others.

For many Chinese citizens, a three-digit number between 350 and 950 determines not only whether your loan application will be approved, but also if you can travel outside the country, and even if you’ll be able to get a date this weekend.

This social credit score is based on your expressed beliefs.

You could get docked for being critical of the government or attending church.

And, let’s get real…

If you think other government-corporate sponsorships aren’t considering their own social credit systems… think again.

In many ways, a social credit system is already here in the U.S.

It’s just yet to be unified.

Life insurers in New York are allowed to make decisions about their clients using information found on social media.

The car insurance industry wants you to put a tracking device in your car so they can charge you based on how much you use it.

In Sacramento, PatronScan allows a network of businesses to blacklist people. Get banned at one establishment, get banned everywhere.

With the advent of “vaccine passports,” which, despite the name, aren’t just for flying on planes…

We begin to wonder just how close to Black Mirror we can get in the next decade. 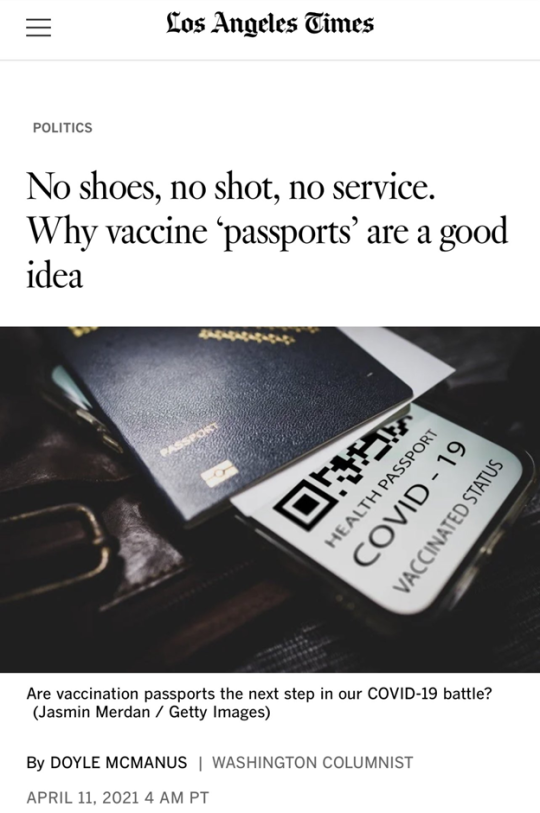 What Do You Think?

What do you think about the rise of social credit scores and vaccine passports?

Email us here with your thoughts.