Theta: The Golden Goose of Crypto

Editor’s note: All week, we’re going to be collecting your thoughts on the cryptocurrency space: the good, the bad, and the ugly. If there’s anything specific you want to know that we haven’t covered, let us know. Have new thoughts today? You can take it as many times as you wish. It’ll take less than two minutes: Click here to share your thoughts.

And approximately 1 billion hours of YouTube videos are watched every day.

Some twenty years ago, many people thought that watching videos on the Internet -- especially in this capacity -- would be a pipe dream.

According to Cisco, video traffic will comprise 80% of all consumer internet traffic by the end of 2021.

But, there’s a problem:

We’re running up against a wall.

Our centralized infrastructure strains under the weight of online schooling, Zoom calls, and cat videos.

While futurists expect Virtual Reality, Augmented Reality, Self-Driving Cars, and the Internet of Things to take over the world in five years…

Many boots-on-the-ground experts are scratching their heads, asking the same question they were asking twenty years ago: “OK. Sounds great. But how?”

Indeed, many projects are hard at work on the infrastructure side, but few address the Internet’s most fundamental problem: centralization.

Nor do they, by extension, address in any meaningful way the mounting concerns when it comes to privacy, security, and arbitrary censorship.

Some big names -- like Google, Sony, and Samsung, and many more -- already understand the inevitable solution: decentralization.

They also understand that those who don’t adapt, to paraphrase Austrian economist Joseph Schumpeter, get “creatively destroyed.”

This is why they’ve quietly hopped aboard the best solution in town: Theta.

Theta is more than just a cryptocurrency.

It’s a technology company, a highly advanced peer-to-peer network, and a decentralized streaming service (theta.tv)... all with a cryptocurrency component.

Theta is also a decentralized solution to the “last-mile delivery problem.”

Currently, the closer you are to the servers, the better your service. Many developing countries get the shaft when it comes to streaming -- and are all-too-familiar with the annoying buffer wheel.

Theta hopes to change that by pushing bandwidth allocation to the Internet’s furthest edges, to the end-user.

The Theta network will run on, in their words, “self-configuring and self-organizing mesh networks.” Any unused and redundant bandwidth, storage, and computing resources can be shared through the Theta network by the end-users.

In short, it’s coming for the buffer wheel’s lunch.

The Theta network allows for every device -- from smartphones, desktops, Smart TVs, and more -- to share their redundant resources with those who need it in exchange for tokens (TFuel).

Every device effectively becomes a “node” on the network.

Rather than all the value being sucked up to the top…

The average netizen has monetary incentives for everything from watching videos, running an “edge node,” or simply having the default software running on their Smart TV or other devices.

In fact, Samsung has announced that Theta’s decentralized e-sports streaming service will be pre-loaded on all Galaxy phones, allowing users to earn Theta’s “gas” token -- TFuel. 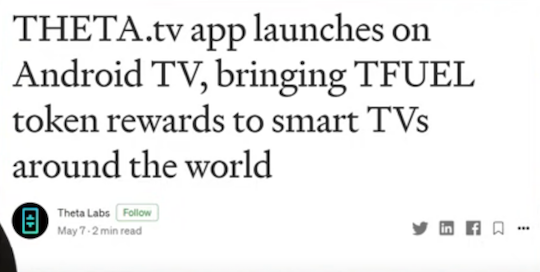 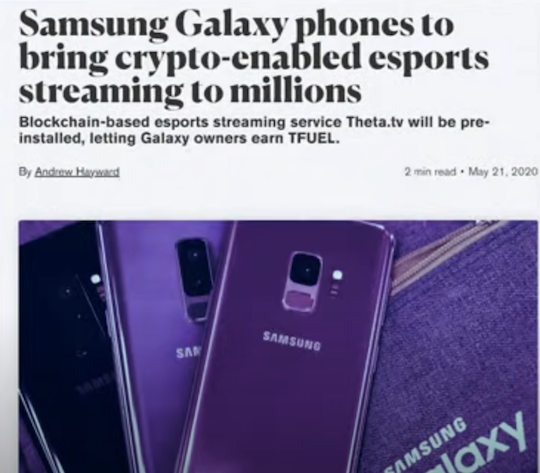 TFuel can, in turn, be exchanged, sold (for bitcoin or other cryptos), or given to content creators to unlock premium content on Theta’s decentralized streaming platform Theta.TV…

Or whatever streaming service adopts Theta’s protocol which will be, in my estimation, most of them. 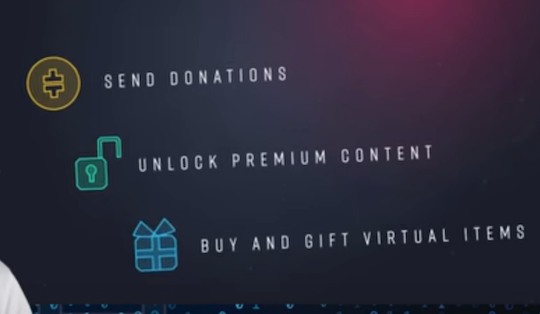 Consider that Theta Labs, the technology company behind the Theta network, has already been granted two U.S. patents.

On September 9, 2020, Theta Labs was granted U.S. Patent 10,771,524 for “Methods and systems for a decentralized data streaming and delivery network”.

This effectively secures their spot as the go-to decentralized data streaming and delivery network.

And on March 15, 2021, Theta Labs was granted U.S. patent 16/10951675, “Methods and systems for blockchain incentivized data streaming and delivery over a decentralized network.”

This one secures the unique tech that allows for thousands of (off and on-chain) micro-transactions per second on the Theta network.

These two patents point to a brand new infrastructure and open up the door for a brand new economy.

The Rise of the “Edge Economy”

Long-time sufferers of our digital screeds know we explored this concept of the “edge economy” years ago in the context of microgrids.

In 2017, LO3 teamed up with Siemens to create a blockchain-mediated microgrid allowing residents to sell excess solar energy to their neighbors.

Since this is a software solution, all of this is automated, requires no extra work, and the earned “energy credits” can be sold to those who need the extra juice.

An estimated 5% of electricity created in the U.S is lost in transit; thus, this model provides an efficient alternative -- and, not to mention, it ultimately makes the power grid more resilient to shocks.

Like most things, we have enough to go around… it’s the distribution that’s the big problem.

Theta, therefore, is doing the same thing with bandwidth.

Since Theta is also a software solution, there’s no need for additional costly infrastructure to get started. As an “edge user,” you simply run Theta’s software on your devices.

Google, Samsung, Sony, Binance (and more) have already signed on to help run the Theta network. I expect many more big names to jump on board this year as well.

Of course, their motivations aren’t purely altruistic but a shrewd (albeit perhaps short-term) move for shareholders.

Google, as you know, owns Youtube. They pay out of the nose to Content Delivery Networks (CDNs) to stream Youtube videos. Theta’s simple software solution could cut Google’s CDN costs by up to 60% and provide an extra cash flow source.

These entities signed on for the same reason Steve Chen, co-founder of Youtube, agreed to be on Theta’s advisory board.

“Theta’s innovation is set to disrupt today’s online video industry much in the same way that the YouTube platform did to traditional video back in 2005. One of our biggest challenges had been the high costs of delivering video to various parts of the world, and this problem is only getting bigger with HD, 4K, and higher quality video streams. I’m excited to be part of the next evolution of the streaming space, helping Theta create a decentralized peer-to-peer network that can offer improved video delivery at lower costs.”

It’s also why many content creators are jumping on board. Lionsgate Films. NASA live streams. MGM Studios. And many more. 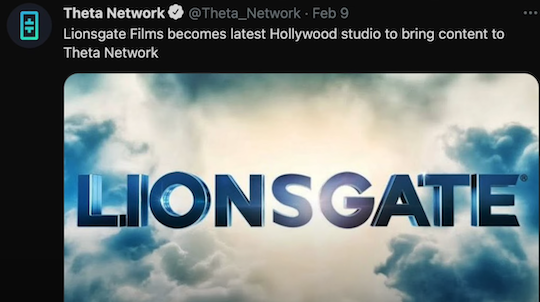 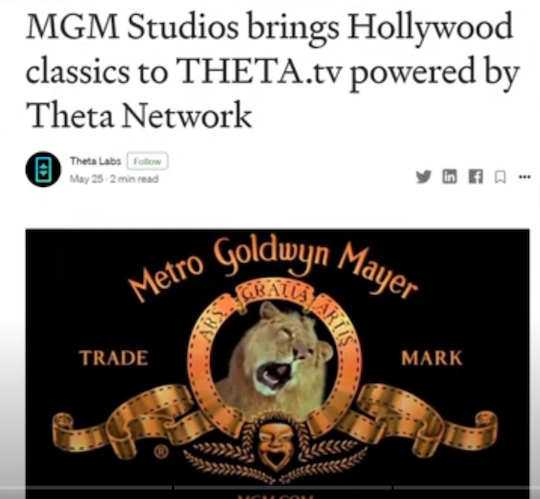 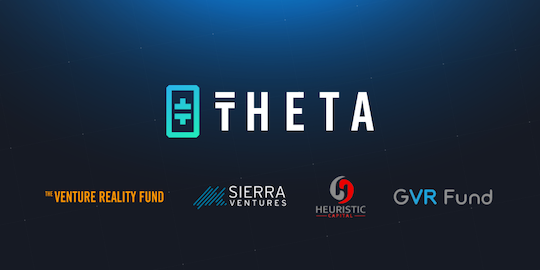 “We look forward to 100x growth as Theta transforms the media and entertainment industry.”

Leave that to the gamblers.

We want to find lasting distributed technology companies with a crypto component.

Specifically, we want projects that:

The key qualities usually include:

Theta is only one such potential Golden Goose I’m studying.

We’ll be looking at all of them in due time. And, don’t worry... we’re still very early.

In fact, I think in five years, we’ll look back at today’s total crypto market cap ($1.8 trillion) and be shocked at how much it’s grown.

(I also believe that getting into Theta this year will be akin to getting into Amazon in 1995… but we’ll save that for tomorrow.)

And it doesn’t just throw a few digital shekels in the virtual pockets of some pimply-faced gamers.

More on that, though, tomorrow when we peek underneath the hood.

P.S. All week, we’re going to be collecting your thoughts on the cryptocurrency space: the good, the bad, and the ugly. If there’s anything specific you want to know that we haven’t covered, let us know. Have new thoughts today? You can take it as many times as you wish. It’ll take less than two minutes: Click here to share your thoughts.

Theta: Blockchain, Galaxy Brain, and Beyond

From ghetto, to grotto, to intergalactic species…