Theta: Blockchain, Galaxy Brain, and Beyond

It’s hump day for crypto week and the survey responses keep rolling in.

One reader asks, “How can I buy Theta? It's not on the major exchanges here in the US.”

First of all, I have no crystal ball… but if I were a betting man, I’d say Coinbase will list Theta this year. That said, I’d be (pleasantly) surprised if it happened before Theta launches its Mainnet 3.0 in June.

At the moment, the intrepid cryptonaut can scoop up some Theta on SimpleSwap.io. (You don’t need to sign up for an account.)

Also, keep plugging your feedback in this survey.

(You can take the survey more than once if any new ideas/questions strike.)

On Saturday, we’ll take a deeper look at some of your submissions and, in response, give some big picture notes about the themes I’m noticing in the survey.

1.] Why I believe in a “one foot in both camps” approach and why I don’t bet the farm on crypto. (Also, my strategy to hedge my crypto bets with tangibles.)

2.] Why “crypto” is a double-edged sword, experimental, dynamic, and could go to zero: and why I’m still optimistic.

3.] Why I don’t care about short-term price or long-term price predictions. (Because nobody knows.) And what I do care about.

Today, we’re going to continue our journey down the Theta rabbit hole.

To that end, we’ll go “beyond blockchain” and into the “galaxy brain”… how Theta began… and why Web 3.0 will be faster, safer, more secure, more private, less clunky, more free, and just plain better.

If you’re the type to like to begin at the end:

The current architecture of the net is too top-heavy.

For starters, it’s more fragile and insecure than the head of the pro-censorship department at your least favorite university.

Worse, it’s allowed for equally unwieldy behemoths to control our data, giving them the power to decide what is and isn’t acceptable on the interwebs.

This has given many a sense that “nothing is as it seems,” making it increasingly difficult to separate fact from fiction, frazzling our natural sensemaking capacities and instincts.

(And, added to this toxic cocktail, our top-heavy monetary system disrupts our ability to plan for and build for the future.)

This isn’t by accident. It’s by design. Or, more specifically, it’s by architecture.

Online, it’s the difference between location-based networking (HTTP protocols), which fosters centralized ghettos of information (what we have)...

And something more akin to, among other things, content-based networking (IPFS/SWARM/Blockchain protocols), the essence of crypto, which fosters smaller, more decentralized garden grottos within our control (what we want).

In all realms of life, good architecture cuts out the noise so you can enjoy the signals. 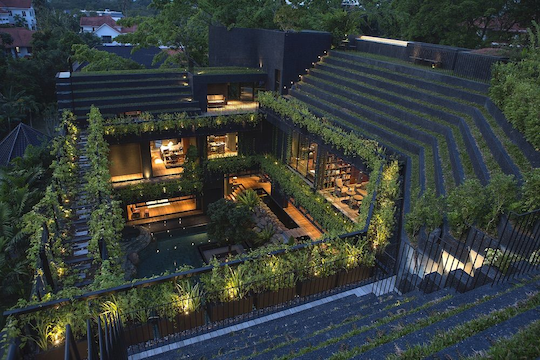 Architecture that’s so “decentered” it fundamentally shifts the power dynamics in humanity’s global nervous system (the Internet), which can’t help but spill into the real world…

No central point of failure. And no overly-dominant central authority.

And, out of this, an architecture that’s so resilient, trustworthy, and efficient it will work even if/when humanity becomes an interplanetary species -- making sustainable and dynamic (spontaneously cooperative) systems more likely here on this planet first.

“Web 3.0,” says head strategist Wes Levitt at Theta Labs, “is in many ways the reaction against the excesses and market dominance of the world’s largest tech companies.”

Web 1.0 typically represents the early days of the internet (think AOL and Netscape). It was about linking content together and bringing it online on top of the Internet.

Web 2.0 is typically characterized by the rise of e-commerce, mobile apps and social media led by Facebook, Google, Amazon, Microsoft, and Apple starting around 2007. It was about linking programs and applications on top of the Internet.

Web 3.0 is the movement to integrate and transcend both of them, spitting out the glut.

“One of the main themes emerging for Web 3.0,” says Levitt, “is the goal of retaining the innovations of Web 2.0, but putting the power back in the hands of the individuals by letting them control their own data and share in the benefits of new technology. Decentralization is one of the core tools used to accomplish that goal, as power shifts from massive global tech companies to end users and their billions of connected devices.”

Web 3.0 is simply a new set of rules that, generally speaking, push unmediated power to provide and capture value to the edges of the network.

Here’s why I believe “crypto” will ultimately succeed:

1.] What we call the “web” is just a collection of protocols.

2.] A protocol is a set of (relatively) simple rules on how to best transmit data at scale.

3.] Protocols are made standard by user adoption and people building on top of them.

Protocols live and die by their ability to solve problems.

If you look through the history of the Internet, the existing protocols used en masse today were written by people looking to solve small problems for themselves or their in-groups. In the process, everyone else, looking to solve the same problem, adopted them.

Thing is, when you solve a small problem billions of times, you tend to, intentionally or not, solve one or more REALLY BIG problems.

This is how the Theta Network began.

Theta Labs started out in the VR/esports industry with their own esports streaming platform called Sliver.TV (now Theta.TV).

The Theta team quickly realized they were spending an incredible amount on (centralized) Content Delivery costs and began looking for solutions.

They couldn’t find it, so they did the next best thing; They built it.

And in solving their “little” problem, they also found a way to solve one BIG fundamental problem on the Internet. Namely, the aforementioned top-heaviness of the Internet, and by extension, the problems that come with it.

On top of distributed protocols, the Internet might look the same for a bit. But it won’t be.

So resilient, in fact, it’ll be ready to rock even if/when humanity becomes an interplanetary species.

More on that tomorrow.

P.S. Keep plugging your feedback in this survey. As mentioned, you can take the survey more than once if any new ideas/questions strike.