"A million dollars isn't cool,” Sean Parker (played by Justin Timberlake) said in the movie The Social Network (yeah, the one about Facebook’s founding).

“You know what is?” Parker asked. “A billion dollars."

It’s no huge stretch to say that, within this decade, we’ll see the world’s first trillionaire. Yes, you might argue that the world already saw millions of them, in Zimbabwe, and your point’s well taken. 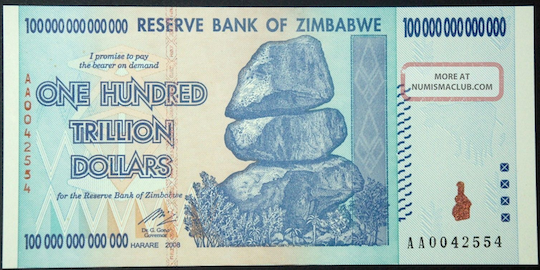 But with the money printers around the world on full blast… and technological innovation compounding at breakneck speed, it’s coming in a currency near you, too.

Consider that, last year alone, a new billionaire was minted every 17 hours on average. Added up, the world’s wealthiest are now $5 trillion richer than they were a year ago.

The world’s first trillionaire is next.

The question: What nascent industry is set to create the world’s next trillion-dollar companies, and perhaps even push forth the world’s first trillionaire?

And how do you invest… even before the majority of the bigwigs pile in?

In an interview with CNBC, astrophysicist Neil deGrasse Tyson said he believed it would come from asteroid mining:

"The first trillionaire there will ever be is the person who exploits the natural resources on asteroids. There's this vast universe of limitless energy and limitless resources. I look at wars fought over access to resources. That could be a thing of the past, once space becomes our backyard."

Eh. Perhaps. (But I think we’ll hit the first trillionaire well before we start pulling platinum from 16 Psyche.)

Others say it will be in Green Tech. As Felix Williams opined for the Oil Price blog: “Big tech has ignored green tech, but make no mistake: The world's first trillionaire could well come from the green tech sector.”

Others posit it could be in the race to cure death.

Surely, there’s no industry with more pent up demand than the industry of avoiding death. And Peter Thiel has put no shortage of his time and money on innovation working to disrupt the grim reaper. In an interview, he said:

"You can accept it, you can deny it or you can fight it. I think our society is dominated by people who are into denial or acceptance, and I prefer to fight it."

Crypto, too, could be another contender.

While all of these are interesting….

There’s another industry that’s gained quite a bit of steam in this direction, rapidly snowballing as you read this, massively disrupting the way companies run their businesses, and almost entirely under the radar.

And, yes, it could help push a particular billionaire (or two) over the edge into the “four commas club.”

Even if not, it’s definitely going to push a lot of relatively small companies to the trillion-dollar mark. (In fact, it already has. It’s the “secret sauce” of at least one trillion-dollar company.)

This is why James Altucher premiered his “To $1 Trillion and Beyond” today… to reveal this opportunity to readers while it’s still relatively overlooked.

You’ve undoubtedly heard about this technology before. But not like this.

Thing is, many still don’t fully understand its impact, believing it’s one-dimensional, and its utility is limited.

“I blame the media for getting that wrong,” James says in today’s “To $1 Trillion and Beyond” event. “It’s like how back in the 1990s you had those people who thought the internet was only good for sending emails. The breakthrough here makes data storage seem like a footnote. It’s what helped launch Amazon from a nice story into a $1.5 trillion giant.”

“And that’s why,” he says, “I’m convinced we’re going to see dozens of new $1 trillion companies explode out of this revolution.”

A few venture capitalists, like tech billionaire Mike Cannon, believe it will fundamentally change the way all businesses are run.

And, today, James is going to show you how to catch this trend before it really kicks off…

Click here to grab a seat at Altucher’s “To $1 Trillion and Beyond” event, premiering today.

Talk to you tomorrow,