It could be this year. It could be next. The NFT bubble is going to pop. Along with a whole lot of glittery portfolios of JPEGs.

And, if you like making money, consider getting ready for what happens next.

More on that in a moment.

I know. I don’t get it, either. I just seized the day. 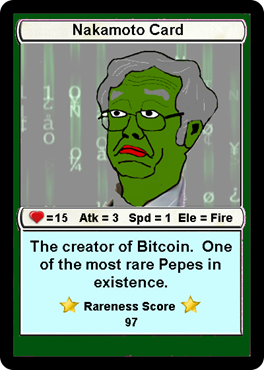 In part, you can chalk the NFT craze up to a flood of anxious central bank fiat sloshing around in the system, looking for a place to go.

On the other hand, however, digital collectibles on the Internet seem inevitable.

That’s not to say you should buy NFTs.

The current NFT market is the epitome of digital tulip mania. I simply got lucky. I bought it years ago before anyone had ever heard of NFTs.

The big lesson here? If you want to be early, follow the story.

My interest in NFTs started in March 2017, after interviewing a few crypto-savvy Venezuelans.

You’ll recall, this was one of the nastiest periods of Venezuela’s economic crisis -- violent protests, tyranny, and hyperinflation.

Despite living during a nasty whirlwind of hyperinflation, these artists were finding ways to thrive. I wanted to figure out how. They told me they were escaping hyperinflation by minting and selling digital collectibles for bitcoin. (Huh?)

“We’re based in Venezuela, and our business has been saved by bitcoin many times,” one of the developers said of his small software business. He added that, during that time, about 80% of the offices around them had shut down. The biggest businesses on their street had dropped as much as 90% of their employees.

Among other things, the small team focused on making and minting “Rare Pepe” cards -- based on the infamous Pepe the Frog meme -- minting them on the bitcoin blockchain and then selling them to early collectors for bitcoin.

They called the collection “Rare Pepe.”

“Rare Pepe,” a developer on the team named Bench explained, “represents the first crowdsourced project in publishing digital art in a manner where content creators can sell tokens associated with their content, certified on the blockchain.”

They showed me some of the cards -- some were already trading for hundreds of dollars.

Intrigued, the thought crossed my mind:

If blockchain-based “digital collectibles” become popular in a few years, the first collectible ever minted might be worth something.

So I grabbed Card 1, Series 1 for a relative pittance. Just in case.

Be Ready For This

Though the low-hanging fruit is all gone in NFTs…

There’s a similar opportunity brewing just like this one. And you still have some time to get in early.

When the digital art bubble pops, a new story will suck up the money… crypto gaming… and it’s going to be bigger.

Zooming out, there are three things you should know:

2.] When a bubble pops, a new trend catches on.

3.] Now’s the time to see where the puck is headed.

By the way, these three things have to do with a BIG project I’m working on behind the scenes with James Altucher.

With our powers combined, we’re putting together a way for you to stay ahead of the trends in crypto, thrive even in the next Crypto Winter, and get in way ahead of the crowd.

Tomorrow, I’ll give you more details…

And show you where I think the puck is headed once the NFT bubble pops. And why it’s an even bigger opportunity for outsized gains.

Why You Can’t Beat the Market

Thinking fast, thinking slow, and not thinking at all…