The Master, the Emissary, and You

History’s most famous nihilist, Friedrich Nietzsche, once wrote a parable about a wise spiritual master who ruled a small but prosperous kingdom.

The master appointed an emissary to help him rule, assuming the emissary saw things as he did.

In truth, though he hid it well, the emissary saw the master’s humility, self-control, and restraint as weakness. Unlike the master, the emissary used his position to advance his wealth and influence at the expense of the kingdom.

The master, unable to comprehend the depth of the emissary’s lust for control, underestimated him. Soon enough, the emissary hatched a clever plan and usurped the master, banishing him from the kingdom.

He then ruled with an iron fist, creating a tyranny, and bringing the land to waste.

The Master and His Emissary

Based on this parable, Ian McGilchrist, the world’s leading expert on brain hemispheres, named his book The Master and His Emissary. 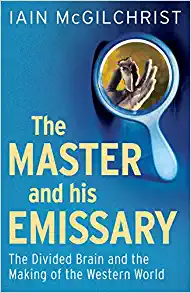 Though many have argued that the “right vs. left” distinction is a wild oversimplification, McGilchrist argues that, while perhaps true in some ways, it’s completely false in the ways that count.

The division of the brain into two hemispheres, he says, is very real and essential to human existence: Each hemisphere represents an entirely different representation of the world, and with differing priorities and values.

Fun fact: According to McGilchrist, the corpus callosum -- the bundle of nerves connecting the two hemispheres -- isn’t just used for communication between the hemispheres. It can also be used by one hemisphere (in this case, the emissarian left) to suppress and subvert the other one.

Thus, McGilchrist makes the compelling argument that our world and our culture are reflections of total left hemisphere dominance -- rule by the usurping emissary.

While the cerebral hemispheres should cooperate, says McGilchrist, they’ve been in conflict for centuries. And the left brain (emissary) has come to dominate the right (master).

And, alas, a system of government dominated entirely by the left hemisphere is a dangerous one.

“Such a government would seek total control -- it is an essential feature of the left hemisphere’s take on the world that it can grasp it and control it. Talk of liberty, which is an abstract ideal for the left hemisphere, would increase for Machiavellian reasons, but individual liberty would be curtailed. Panoptical control would become an end in itself, and constant CCTV monitoring, interception of private information and communication, the norm. Measures such as a DNA database would be introduced apparently in response to exceptional threats and exceptional circumstances, against which they would in reality be ineffective, their aim being to increase the power of the state and diminish the status of the individual.”

The very concept of the individual, he writes, depends on the concept of uniqueness. But, according to the left hemisphere’s perspective, individuals are not defined by their uniqueness. Instead, they are more akin to interchangeable parts of a larger, linear mechanistic system. And this machine must be controlled at all costs.

Pop-science tends to portray the left and right brains as doing different things -- art vs. science, creativity vs. logic, etc.

According to him, the left and right brains don’t do different things, they do things differently.

(For example, the left hemisphere, when dominant, can be just as adept at art than the right. Its focus on what to create and how to create it, however, will be wildly different.)

Each hemisphere, in short, acts according to its preferences.

Left brain: Narrow focus, prefers things to be abstracted and devoid of context.

“The left hemisphere,” says McGilchrist, “prefers the impersonal to the personal, and that tendency would in any case be instantiated in the fabric of a technologically driven and bureaucratically administered society. The impersonal would come to replace the personal. There would be a focus on material things at the expense of the living.”

The bonds between individuals -- and the context in which each individual belongs -- would be neglected or even actively disrupted, as it would seem “both inconvenient and incomprehensible to the left hemisphere acting on its own.”

In such a society, says McGilchrist (again, keep in mind he wrote this in 2009):

“Resentment would lead to an emphasis on uniformity and equality, not as just one desirable to be balanced with others, but as the ultimate desirable, transcending all others. As a result, individualities would be ironed out and identification would be by categories: socioeconomic groups, races, sexes, and so on, which would also feel themselves to be implicitly or explicitly in competition with, resentful of, one another. Paranoia and lack of trust would come to be the pervading stance within society both between individuals, and between such groups, and would be the stance of government towards its people.”

McGilchrist posits that the left brain has dominated the West since about the 4th century -- since ancient Greece passed its peak.

But there were brief periods when the right brain gained ground and we saw a societal ‘hemispheric balance.’

During the Renaissance, for example, McGilchrist posits we saw the right hemisphere make a resurgence, causing an explosion of art, philosophy, innovation, creativity, and new ways of doing and being.

He asks us to compare the art of the Renaissance to that of the Reformation. During the Renaissance, art was more lifelike, had more depth, and included more cultural references. This, he suggests, is due to the rise in the right brain perspective. 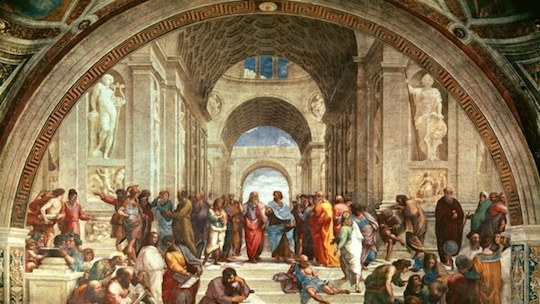 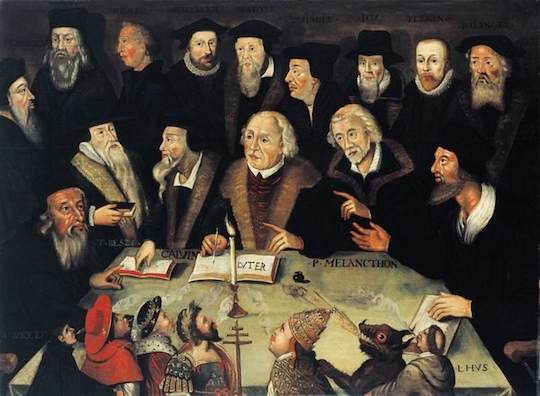 Interestingly enough, historians tell us that the Renaissance was kicked off in large part by two major events:

1.] The bubonic plague, which marked the end of an era in the West. Its impact was profound and it resulted in wide-ranging social, economic, cultural and religious changes.

2.] The printing press, which disintermediated knowledge and crushed the gatekeepers.

Some argue the same is happening again.

Daniel Pink, in his book A Whole New Mind (published in 2006), argued that the right brain is set to gain ground once again.

According to Pink, we are moving from the logical, linear, computerlike Information Age to the inventive, big picture, nonlinear “Conceptual Age.”

He argues that the future belongs to…

Pink cites automation as one of the big factors in this shift. Many left-brain tasks are being automated, opening up societal bandwidth for the right hemisphere to gain ground.

(And this was, mind you, before the rise of bitcoin, smart contracts, and distributed networks.)

The Renaissance was defined by an event that shook the social order to its core (plague), and the introduction of the most powerful disintermediating technology to have ever existed -- the printing press.

The times were ripe for a seismic shift.

It’s not difficult to see the parallels between then and now.

Corona has completely upended our lives at the same time powerful disintermediating technologies (crypto) are on the rise.

But, as in the times of the Renaissance, technology isn’t the most important part of this story.

The most important bit? YOU.

As outlined yesterday, the most powerful “virtual currency” isn’t bitcoin… or any other cryptocurrency.

Unique and creative ideas and solutions are today’s most valuable virtual currencies.

Which brings us to how you can catch this wave.

As I also mentioned yesterday, my colleague James Altucher has been one individual at the forefront of this right brain revolution.

His bestselling book Choose Yourself broke the mold by saying something few others had considered:

The only “safe” (and worthy) option in today’s world is standing apart from the crowd and leveraging what makes you, as an individual, unique.

(According to McGilchrist, this is pure right hemisphere thinking.)

This week, we’re taking his ideas a quantum leap forward…

Altucher’s put together a virtually foolproof way of monetizing your unique ideas and solutions in as little as 30 days. (In some cases, even a weekend.)

Turn yourself into an idea machine...

Dig your heels into your passion…

And make money from doing and sharing what you love.

This latest project, in collaboration with James, is not only designed to show you how.

But also how to turn it into an income stream… FAST.

We were hoping to drop it in your lap today.

But we were met with a slight hiccup. (The best laid plans of mice and men…)

We’ll leave you with a hint…

P.S. Got something to say? Say it! Email us here.

The Best “Virtual Currency” (Not Bitcoin)

Plus, the right-brain Renaissance…