“Discoveries, like resources, may well be infinite: the more we discover, the more we are able to discover.”
—Julian Simon, The Ultimate Resource

“Gradually, and then suddenly.”

As pointed out yesterday, Ernest Hemingway understood full well the nature of change. And that famous line in his The Sun Also Rises, although fiction, was also autobiographical. Hemingway was no stranger to being blindsided by the torrential endgame of the uncontrolled daily drip.

You see, it’s not the tidal wave we should worry about. It’s the drip. It’s the small leak. That’s where the real problems begin.

It’s our tiny day-to-day habits that shape our lives. And it’s the trillions of tiny shapings that massively shape the world.

Canyons are built on tiny habits. As are bankruptcies. And beer bellies. Avalanches begin with the overlooked potency of one tiny snowflake.

Though there’s no official date to speak of, the Renaissance, a time of great political and religious turmoil, kicked off slowly somewhere around the 15th century. Trillions of tiny changes led up to a tipping point, and then an explosion of activity that broke the mold completely and, in effect, birthed the “modern self.”

Leonardo, Michelangelo, and Raphael created their timeless masterpieces; Columbus sailed west, Vasco da Gama sailed east, and, for the first time in history, the Magellan expedition circumnavigated the globe; Luther nailed his theses to the door of the Wittenberg castle church, striking a nerve, causing untold havoc, eventually leading to the Reformation; and Copernicus developed the heliocentric theory, kicking off the Scientific Revolution, and kicking the geocentric cosmology -- which had ruled minds for thousands of years -- to the curb.

(For perspective, this all happened within the span of time from Woodstock and the Moon landing to now.)

For an intrepid few, it was an exciting time to be alive. And for others, it was absolutely, unbelievably terrifying. By 1498, the doomsayers had caught hold of Europe’s imagination and the masses were convinced the end was nigh. (That said, with constant warring, epidemics, and famine all around them… they didn’t need much convincing.)

The merchants of doom filled the minds of children and adults alike with visions of the world burning. Fire. Brimstone.

(I’d be remiss not to mention the strangest twist of fate. We are here yet again, but with science, not the church, warning of impending hellfire and the great beast: Carbon-12. Which is, of course, made up of six electrons, six protons, and six neutrons. 666! Plot twist, indeed!)

Albrecht Dürer, a famous painter, printmaker, and woodcutter, caught hold of the public sentiment and published in his book Apocalypse various scenes from the Book of Revelation, which rapidly brought him fame across Europe.

Though his woodcutting skills were (and still are) unmatched, Dürer was a pioneer in many ways. Not only did he invent the basic principle of ray tracing (a technique used today in modern computer graphics), he was the sole publisher and seller of his Apocalypse series. He became the first artist to publish a book and create a copyright, making him one of the world’s first self-published authors.

His most famous woodcutting was the Four Horsemen, shown below, courtesy of the Metropolitan Museum of Art: 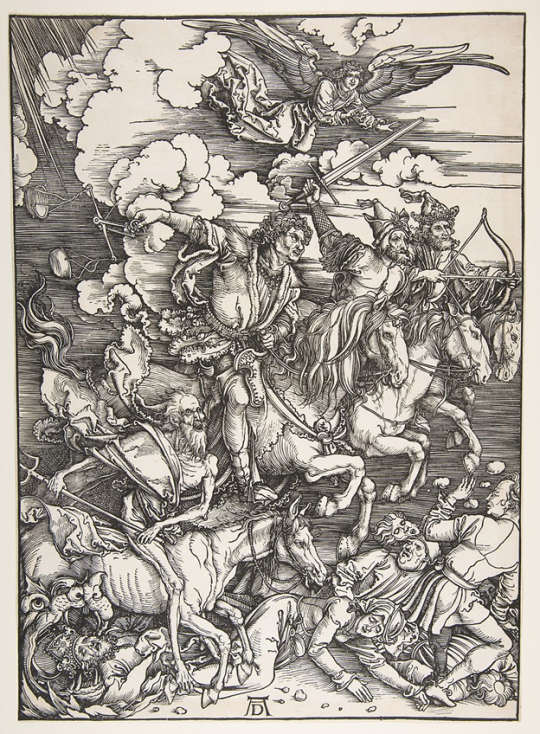 Though many people took his paintings literally, Dürer largely meant for them to be symbolic.

In the bottom corner of the Four Horsemen, for example, you see a bishop’s head getting noshed by a dragon. Dürer meant for it to represent a reckoning for the excesses and corruption of the papacy.

He was right. Though the world didn’t end, the day of reckoning did come for the powers-that-were.

There are certainly many parallels to today.

The Renaissance, for one, was kicked off by a plague and a technology that decentered knowledge from the ruling elite -- the printing press.

Back then, the ruling elite wanted the population to have blind faith in their agendas. (Today is no different.)

History is cyclical. And, if you can relax your vision, you’ll often find it rhymes in the weirdest ways.

The Renaissance was ultimately defined by a new cosmology. The heliocentric cosmology gave the individual a newfound autonomy and the power of reason, but it was paid for largely by the loss of meaning and the rise of alienation.

Are we yet again on the cusp of yet another cosmological paradigm shift?

In my upcoming (yes, self-published) book, I argue yes. (Or bust.)

And, if we are indeed on the cusp of another one, those who face the changes early will be like Magellan circumnavigating the globe while everyone else thinks the world is flat… and that the firmament is falling.

But how, you may be wondering, do you get ahead of the curve (no pun intended)?

Nothing New Under the Sun

Focus on what you can control.

During times of great change, it also pays to leverage the changes…

And it doesn’t hurt to use some of the greatest technological innovations in the past millennium:

→ The printing press
→ The Internet

If Albrecht Dürer were alive today, who knows what he would be up to.