The Cat Cabal, the Pope, & the Plague

Throughout mid-life, he served as a skilled lawyer, one of the best of his day. And, throughout his later years, he held a hatred for cats known to no man, before or after his time. Especially in those years following 1227, when, at the ripe age of 82, he changed his name to Gregory, thus becoming Pope Gregory IX.

Gregory, you see, is most known for starting the Papal Inquisition, where justice rained hard on the heretics who dared speak sideways about the church canon. Alas, these heretics, Gregory’s underlings revealed, were part of a vast satanic cult which worshiped devils in the form of a demonic man and a diabolical black cat.

In response, Gregory penned the infamous Vox in Rama, detailing this underground cult’s ritual (which included, among other things, kissing a black cat’s buttocks) and condemned cats as blasphemous instruments of Satan. By Gregory’s decree, every cat, especially black cats, had targets on their backs. As a result, tens of thousands, maybe even hundreds of thousands of cats were killed across Europe over the years, all in the name of razing witchcraft from the face of the earth.

This became such a common practice, cat killing rituals survived for centuries in Europe. To this day in Belgium, an entire festival, Kattenstoet, is dedicated to throwing cats from buildings and burning them in the streets. (Today, those cats are stuffed, and they claim the festival is in celebration of the feline. Ha!) To boot, Queen Elizabeth I celebrated her coronation with the burning of a cat-stuffed effigy.

Perhaps the papacy did indeed save us from an evil feline plot brewing behind closed doors, centered around kissing cat’s behinds. (Or, perhaps, plot twist, the real villain was the brain parasite known today as toxoplasma gondii, which resides in the bellies of cats, and, we now know, rewires the human brain and can cause schizophrenia.)

Whatever the case, no drastic action is without an unintended consequence or two. And many historians believe these cat killers are at least in part responsible for the Black Plague, which would come to ravage Europe 100 years after Gregory’s death.

Indeed, from 1346 to 1353, a century following Gregory’s reign, the most deadly pandemic in history ravaged through Europe, killing some 200 million people, an estimated 30 to 60% of Europe’s population. Many Europeans believed it was the end of the human race. Nay! The apocalypse! The end of the whole world as all things knew it! If you were a survivor, you lost several people you held dear. If you were not, you probably died a death so horrifying you would only wish it on your top three enemies.

Modern DNA testing apparently reveals the plague spread by contact, which led many to believe it was driven by the lowly flea, carried all around the world on the backs of rats, running to and fro from trade boats. Cats, of course, are esteemed rat hunters. They would’ve culled the population of rats. But since the reign of Gregory, many Europeans had come to assume a radical hatred for the felinious creatures. The massive reduction in rat predators during this time, therefore, some say, is closely correlated to the amount of people led to believe the reason cats were so unruly was because they answered only to Satan himself.

Some historians viciously doubt the veracity of this story (and only some of them, we’re told, are toxoplasmotic cat ladies), claiming it’s an old myth. Of course, it makes for a great story about unintended consequences, which is probably why it’s survived the test of time. Whatever the case, killing cats, evil or not, certainly didn’t seem to help the plague.

Today, however, in our times, the situation has been flipped. Humans have suffered through worse pandemics in the past. But never have humans been forced to suffer, all around the world, such extreme unintended consequences as a result of the reaction to a pandemic. The balance has certainly not been struck. The case can surely be made that the reaction to the virus will prove, in hindsight, more far-reaching and devastating than the virus itself. Time, of course, will tell. 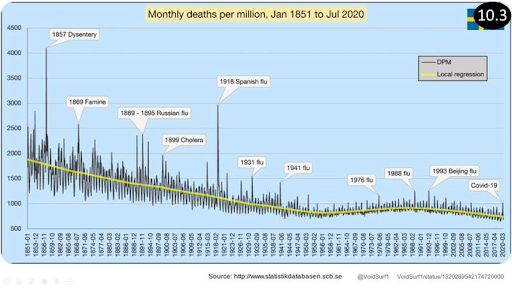 To name only four such unintended consequences, as laid out by the editors at FEE.org:

The CDC found that one in four young people have had suicidal thoughts during the pandemic to date. (Compare that to less than six percent in 2008-2009 according to CDC). More than 40 percent of respondents said the crisis had prompted mental health or behavioral problems.

Despite healthy young people (with zero chronic preconditions) being at virtually zero risk of death from COVID, they have seen some of the harshest lockdowns in colleges, extracurricular activities, and more.

Naturally, social isolation and despair are key triggers for substance abuse relapse. So it’s no surprise to see the emotional and mental consequences of COVID-19 lockdowns have exacerbated an already-severe drug crisis in the US.

“The number of Americans who say they can’t afford enough food for themselves or their children is growing,” the Wall Street Journal reported earlier this year.

As of late-July, the WSJ reports, “about 12.1% of adults lived in households that didn’t have enough to eat at some point in the previous week, up from 9.8% in early May, Census figures show. And almost 20% of Americans with kids at home couldn’t afford to give their children enough food, up from almost 17% in early June.”

“Tragically,” Brad Polumbo writes in FEE.org, “trapping people at home and cutting them off from outside support is a recipe for domestic violence. This has played out on a global level, with reports of skyrocketing domestic violence amid tension and home confinement in India, Mexico City, the United Kingdom, and other nations around the world.”

It’s not for lack of knowledge that we’ve fumbled through this crisis. We have all of the knowledge we need at our fingertips. What we do not seem to grasp yet, however, is the limitations of this knowledge. We are Icarus, flying towards the Sun, capable of anything, not noticing the drip, drip, dripping of our wings. For that, however, we need only to pay heed to the late philosopher Friedrich Hayek and his observations on the limits of knowledge -- what he called the “knowledge problem.”

To wit, he wrote:

“If we can agree that the economic problem of society is mainly one of rapid adaptation to changes in the particular circumstances of time and place. It would seem to follow that the ultimate decisions must be left to the people who are familiar with these circumstances, who know directly of the relevant changes and of the resources immediately available to meet them.”

Hayek wrote mostly about things we already know intuitively, but often find trouble articulating and embodying in an age of floating-headed, disembodied, technocratic, top-down, global decision-making. What do we know? Decentralized decision-making -- where the sense-making, response-ability (responsibility), and clarion calls for action are held as close to home as possible -- is almost always the most effective course of action. We have learned this lesson again and again throughout history, but the only thing more fickle these days than human memory is the human attention span. (Which, as it has been said, has perhaps shrunk to the size of a plague-ridden flea.)

America alone learned this hard-won lesson several times throughout its history -- some to victory and some to defeat -- and, most recently, in the 20 years between 1955 and 1975, when an oxen-powered, ox-cart distributed tiny “third world” country spanked raw the “most powerful country on Earth,” despite its technological and command-and-control superiority. Even the most hardened centralists were forced to come to terms that this was all because of Vietnam’s non-local, distributed economic structure. (There was no single point of failure in its labyrinthine, seemingly chaotic, decentralized distribution chains.)

Moral of the story?

In the past, we killed cats to keep the Devil out of our communities, possibly causing one of the worst and deadliest pandemics known to man.

Today, we kill everything else in a monomaniacal pursuit to rout out an invisible, but not quite as deadly, demon-cat that, like all cats, simply refuses to do what we tell it.

If all else fails, however, we can always fall back on the papacy and find a suitable scapegoat. After all is said and done, we always have a time-tested excuse: They (the devil) made us do it. And, for that, we will come full circle in doing what humans always do:

Failing never to repeat the well-worn mistakes of history.