By the looks of it, the “Paris of the Middle East” is booming.

TikTokers, by all accounts, are having the time of their lives, partying it up in Lebanon’s most exclusive nightclubs. Posh restaurants can barely keep up with the reservations. Beachfront villas are booked solid for the rest of the year.

“We are booked up almost every day, and the reservation phone line is ringing at all times,” Ali Haidar, manager of a fancy restaurant in the coastal city of Byblos, recently told Al Arabiya English. “We didn’t expect to see this high number of diners; we were even surprised.”

Haidar added that most of his customers were either Lebanese expats or foreigners. Pierre Ashkar, head of the Lebanese Hotel Association, concurred:

“Middle-class residents who used to spend their vacations in Turkey, Cyprus, and Greece no longer have the financial means to do the same. They, instead, go to Lebanon’s mountainous and coastal areas to escape from the dreary routine of everyday life, which is partly causing this touristic traffic.”

And here you will find a tale of two countries.

Again, you wouldn’t know it by the raucous clubbing videos on social media, but Lebanon is dealing with a grueling financial meltdown. The World Bank recently said it’s one of the world’s worst three depressions since the mid-19th century.

Though the tourist-driven cosmopolitan centers are fairly insulated (but that’s changing), the majority of Lebanon is in a freefall.

Many Lebanese citizens can’t get their money out of the banks. And even if they could, they still wouldn’t be able to find gas to fill up their tanks. Though electricity has always been a bit spotty since the end of the civil war in 1990, now the blackouts take up the better half of most days.

This week, a video surfaced revealing the gravity of the situation. The first scene is of people scrambling for gasoline while a police officer is shooting his gun in the air in an attempt to disperse the increasingly distraught crowd. The second clip is a man screaming, “There is no car gasoline, there is no medicine, there is no food, there is no milk for children. This is Lebanon in 2021!” 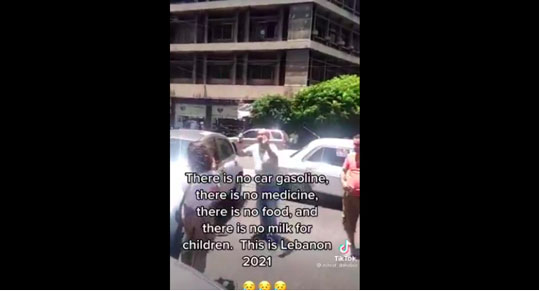 Information International, a Beirut-based research firm, shows that the poverty rate among Lebanese is estimated at 55%. And that number is set to go only one way: up. 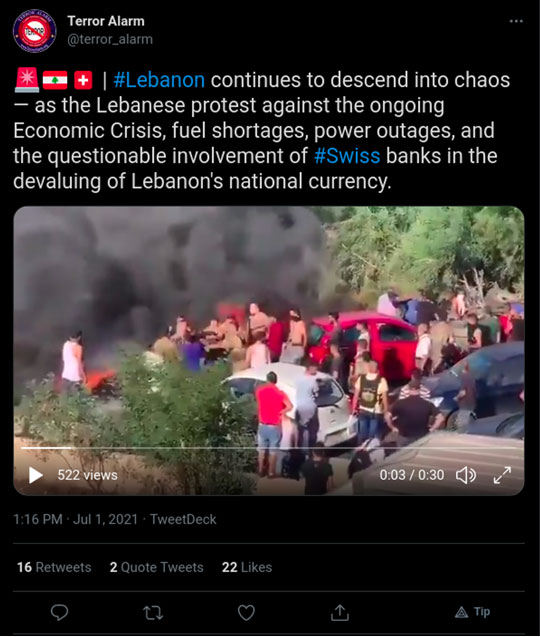 As the man in the video above mentioned, pharmacies have run out of medicine… essentials like baby formula is difficult to find… and the cost of absolutely everything is skyrocketing in the local currency. 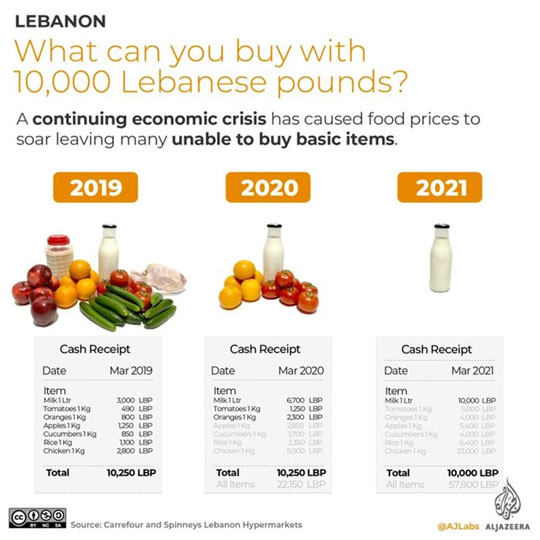 News portal Middle East Eye recently released a video on Lebanon’s growing “period poverty.” Most women can no longer afford to by tampons because the cost of all menstrual products has skyrocketed by almost 500%. 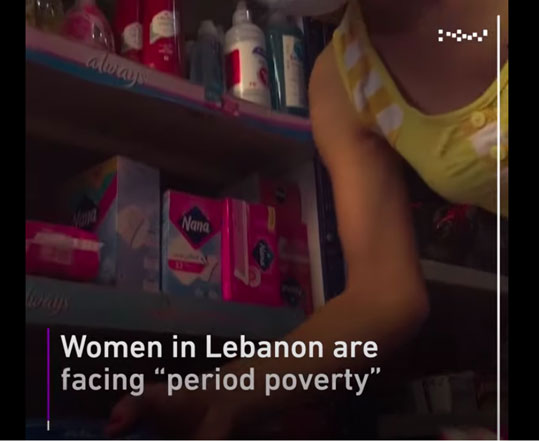 So, why, then are tourists flocking to Lebanon? Because as those holding the Lebanon pound see prices going up, those holding other currencies are seeing things get cheaper.

Sooly Kobayashi, a Lebanese bitcoiner, showed the difference in just two years, from January 2019 to January 2021.

Meanwhile, however, a solution is right around the corner.

Provided by those who helped create the problem… and just in time to save the day.

The Art of Preselection

Last week, we pointed this out as a common scenario during periods of hyperinflation.

Daily sufferers of our diurnal screeds know we recently introduced Lehel, a vlogger who has taken up the hefty topic of hyperinflation. Lehel grew up in Romania during the country’s bout of intense hyperinflation in the ‘90s.

He saw firsthand what hyperinflation does to a country and its people. Today, he lives in America and is seeing the same signs of impending hyperinflation he and his family saw in Romania.

In Romania, he pointed out, those who held their money outside of the local currency fared much better than those who didn’t. Those who didn’t ended up in the same situation most Lebanese are in now -- forced to pay wildly inflated prices for even the most bare essentials.

Point blank, those ahead of the curve preselect alternatives before the herd.

Meanwhile, central banks are devising their own alternatives to ‘maintain’ or ‘restore’ confidence in the banking system… Lebanon, included. 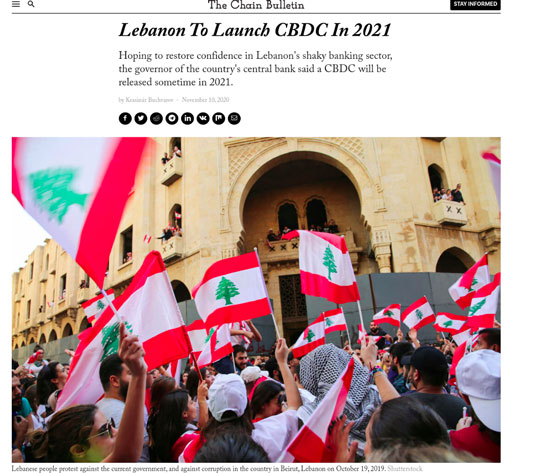 Last year, the governor of Banque Du Liban, Riad Salameh, announced that the CBDC project will help the country move to a “cashless system”, which, he said, will stimulate the flow of money both locally and abroad, restoring confidence in the banking sector.

Indeed, as we have said, crises create opportunities.

But it’s a sword that cuts both ways. And central bankers from Beijing to Bogotá are betting big that, when the time comes, you’re going to want what they’re selling.

In September 2020, during a speech at the 20th Anniversary Chicago Payments Symposium, president of the Federal Reserve Bank of Cleveland, Loretta J. Mester, outlined the Fed’s work on the country’s central bank digital currency (CBDC).

She also noted that the experience with emergency payments led by the coronavirus pandemic has accelerated the work in this area:

“Legislation has proposed that each American has an account at the Fed in which digital dollars could be deposited, as liabilities of the Federal Reserve Banks, which could be used for emergency payments.”

Mester also added that “Other proposals would create a new payments instrument, digital cash, which would be just like the physical currency issued by central banks today, but in a digital form and, potentially, without the anonymity of physical currency.”

Lehel, our Romanian hyperinflation maven, doesn’t mince words about what he thinks will happen when central banks roll out their CBDCs.

“They need it to have smart wallets and programmable money to do fine grain capital controls. We had this under communism, but we didn't have the tech for it. Certain percentages of savings were enforced. You could only spend X amount on Y product.”

CBDCs, he said, allow for “traceability and maximum control as well as social behavioral forced changes. I can even imagine hyperinflation will be a mechanism to make people flock into the ‘new’ dollar, without government making a law for it, like how we had the new Romanian Lei.”

In hyperinflationary Romania, either you chose alternatives, or alternatives chose you. And, Lehel said, “Things that don’t seem normal become normal very fast.”

And anyone who tells you, “It can’t happen here”...

Show them this page.