Bitcoin: Why it Could Go to $1 Million

New is the well-forgotten old.

And that’s why, upon writing, bitcoin is inching towards a new all-time high of $50,000.

I don’t have a crystal ball…

Whether or not bitcoin will ultimately succeed is a different conversation.

But, having been watching it for almost a decade, here are my thoughts on why bitcoin will hit $50,000…

And could even go to $1 million.

For the record, I’m not the first to say this.

Today, more and more ex-Wall Street players and financial influencers are singing the same song. (And, this time, fewer people are laughing.)

Take, for example, this Business Insider article from last October (2020). 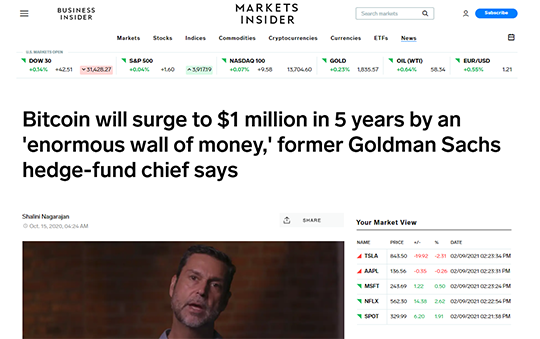 Why do I think it could happen?

Gamestop is a Microcosm

The recent Gamestop saga did more to expose the fleshy, corruption-infested innards of the financialized system than any book, article, or blog post could ever dream of.

The story is so juicy it’s already being shopped around to become a movie.

Why? Because it struck a deep-seated nerve. And everyone knows it. And if they don’t know it, they feel it.

It strikes at the heart of what’s wrong with our financial system.

(I hope those making the movie get his. Otherwise, it’ll be a missed opportunity of a lifetime… and a total flop.)

If we zoom back, we see why the Gamestop saga happened.

Financialization of the economy over the years has forced risk-taking onto EVERYONE.

Financialization has blurred the lines between “savings” and “investment.”(More on what I mean by that in a moment.)

Gamestop was just a microcosm. It was a tiny revolt against a broken behemoth, using the broken parts against it. It was only a matter of time.

As Elon Musk tweeted, “In retrospect, it was inevitable.”

(You might’ve also heard that Tesla filed a document with the SEC this week stating that the company spent $1.5 billion to buy bitcoin. Not irrelevant.)

In short, the Gamestop saga revealed our current (unhealthy) relationship with risk.

Risk-taking is productive, necessary and inevitable in a healthy economy. When it’s voluntary and intentional it’s most often a boon for society.

But it becomes unproductive when it is forced.

And then it becomes…

A Recipe for Disaster!

When individuals are forced into taking risks and speculating -- or else watch their savings wither away because of unelected bureaucrats running the currency to the ground… it’s a recipe for disaster.

When people are forced to sit on the sidelines while cronies make obscene money at their expense… it’s a recipe for disaster.

When people are forced to watch their communities, local businesses, family members and friends get destroyed, while bankers, politicians, and their cronies are lining their pockets… it’s a recipe for disaster.

When the entire economy becomes one big casino for the elites… it’s… eh… you get the point. Disaster!

And when the peasants revolt -- and use the “house rules” against the “house” -- like a card counter at the Bellagio, they get smacked down.

But what did the cronies think would happen?

It’s hard to overstate this one point, because it hacks right at the root:

In a healthy economy there’s a difference between savings and investment.

Savings are held safely for the future. Investments are savings exposed to risk.

Today, there’s little difference between the two. Today, saving in the dollar has become inherently risky.

Over the years, savers have been pushed out of traditionally “safe” investments: CDs… money market funds… and bonds.

Even if most people don’t consciously recognize what’s happening, it influences their behavior nonetheless.

When money is slowly (or quickly) becoming worthless, society settles for less. People don’t plan for the future as much.

While the ancients took the long-view -- and built things to last ages -- everything today is built to fail.

This is not by accident.

Planned obsolescence is baked into the cake!

Good money fosters a low time preference and encourages saving, and envisioning for the future.

(And the entire population is pushed into becoming YOLO traders who make reckless decisions.)

What can fix this?

That means money with the right incentive structure. It means incentivizing saving and productive investment.

It could even mean a digital asset outside the stranglehold of Wall Street and Crony Inc.

Nobody can deny one thing: Bitcoin is brilliant.

Though it’s not perfect (nothing is), it’s a glimpse of what’s possible when human ingenuity is put to the test. It’s a testament to what happens when immense pressure “cooks” carbon and creates a diamond.

As the chaos mathematician put it in Jurassic Park: “Life finds a way.”

Those at the Fed may have actually thought their interventions could eke out productive investment in the markets.

But they’re too willfully blind to see it’s done the opposite.

Their interventions have produced malinvestment, distortions, bubbles, and a massively over-financialized mess.

But what happens when MILLIONS -- and maybe even hundreds of millions -- of people catch on?

They either lay down and accept it. Or they search for alternatives.

Some will indeed lay down.

But many will seek alternatives.

And they’ll begin to see -- gradually and then all of a sudden -- what real money has looked like in the past.

Bitcoin is nothing new.

Even if bitcoin doesn’t go to $1 million. Even if it goes to zero…

The IDEA of bitcoin will survive. Because it’s not a new idea.

New is simply the well-forgotten old.

I suspect sound money is an idea whose time has come (again). And such an idea, to paraphrase Victor Hugo, is the most powerful force in the world.

But even if I’m wrong…

If a stock like Gamestop can go to almost $500 because YOLO traders, even at the risk of getting wiped out, want to stick it to Wall Street.

Bitcoin, at the very least, has some room to run.

(Note: This is not financial advice. Bitcoin is risky. If you’re looking for advice: Never invest more than you can afford to lose.)

Anatomy of a Crypto Scam

How to stay safe in the Wild West of crypto…