Want to see what hyperinflation looks like in your own life? Pull out a piece of paper and try the exercise below.

A couple of weeks back, we introduced a vlogger named Lehel.

Lehel grew up in Romania during the country’s bout of intense hyperinflation. He saw firsthand what hyperinflation does to a country and its people.

Today, he lives in America and is seeing the same signals of impending hyperinflation he and his family saw in Romania.

In previous videos, he laid out a rough timeline of Romania’s currency collapse:

Any of that sound familiar? Perhaps.

But before we start making connections, let’s take a step back before we take two steps forward.

One thing to keep in mind is that nobody -- not even you (or even me!) -- can predict the future.

Those who suffer from “normalcy bias” are just as susceptible to making bad decisions as those who hold what’s called “perspectival supremacy.”

While normalcy bias is expressed with thoughts like, “It can’t happen here,” and “things will get back to normal and keep going on as normal,” perspectival supremacy drives people to feel like the moment we live in is the most catastrophic and important moment in history…

While that’s a fairly common bias, and, admittedly, an easy one to argue, what’s most dangerous about this particular bias is that given the urgency and gravity, individuals also tend to believe that their own predictions, prescriptions, and remedies are the absolute most crucial.

While normalcy bias can cause denial, apathy, and abnegation of responsibility, perspectival supremacy bias can cause paranoid delusions, controlling behavior, obsession, and a persecution complex.

Both perspectives tend to swing too far from the center, causing an imbalance in perspective. If I had to guess, sanity and strength are found somewhere in the middle.

So, although a hyperinflationary environment is possible, it’s not set in stone it’ll happen this year… or even this decade.

Our beat, of course, is helping you to prepare no matter what. And you’ll lose nothing by preparing yourself mentally, physically, financially, and spiritually for any worst-case scenario.

In our age of volatility, the wise would do well to take a page out of Bruce Lee’s philosophy: “Be like water making its way through cracks. Do not be assertive, but adjust to the object, and you shall find a way around or through it. If nothing within you stays rigid, outward things will disclose themselves.”

The hyperinflation scenario, however likely it might be, is an abstraction, a general idea of the way things may go. Even if it does happen, the aftereffects are still unpredictable.

“I’m not saying it will happen,” Lehel makes clear. “It could be another 12 years, 20 years. Maybe it will never happen. Maybe the good times are about to come… the roaring 20s. Who knows? I’m just talking about what happened to us, and what could happen. So don’t buy too many Campbell’s soups right now and argue with your wife about all of these soups.”

Instead, he says, first focus on building a cushion.

While a little extra food isn’t a terrible idea, rather than going all out and filling your entire garage with dehydrated sweet potatoes…

It’s just as important, Lehel says, to have six month’s expenses saved up. It sounds counterintuitive, because, in a hyperinflationary environment, savings get wiped out.

In the beginning stages of hyperinflation, he explains, there are major dislocations in the economy. This could mean that any job or source of income that might seem “safe” and predictable at the moment won’t be in the future.

It’s easy to forget that, even in bad times, life will still drag on. People will still work. You’ll still need to buy things and pay your mortgage or rent. Absent some catastrophic event, or an undead uprising, things are unlikely to spin out of control and turn into Mad Max overnight.

“Even in hyperinflationary scenarios,” says Lehel, “you have to have a three to six-month buffer.”

So, here’s the exercise.

If we can imagine that a hyperinflationary scenario is imminent, we can also get a good idea of what that might look like with one simple exercise.

On a piece of paper, write down these three things in a single row:

2.] your total income (after taxes)

Underneath, write down the date three months from now, and then cut your income and savings in half.

Underneath that, write down the date six months from now, and then cut that income in half. 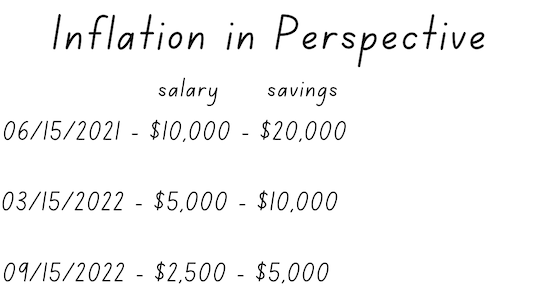 “It’s very important you start looking at this,” says Lehel. “You can take a look at it with your spouse and think about what would happen if this happened to us? And, knowing this would happen to our neighbor, and our neighbor’s neighbor… and everyone in the country.”

Imagining this is the case, now write down and consider these questions:

→ What would I buy now if I knew this was going to happen?

→ What small actions would I begin taking in my own day-to-day life if I knew this was coming?

→ Who would I begin to connect to in my immediate community?

→ How would I ensure that my family will be secure physically, financially, mentally, and psychologically?

→ What skills do I currently have that would be useful in a hyperinflationary scenario?

For now, ruminate. Think about it. Let it percolate.

More on those questions -- and some potential ideas -- in tomorrow’s episode.

[Ed. note: As you may know, we have our own predictions. According to our research, July 14 could be a crucial “flashpoint” that will eventually be seen as the beginning of the end for the dollar’s supremacy on the world stage. If true, this could change every aspect of your life… from how you spend and make money to your retirement to every plan you have for the future. Our advice? Click here for everything you need to know before July 14.]