“The game of science is, in principle, without end. He who decides one day that scientific statements do not call for any further test, and that they can be regarded as finally verified, retires from the game.”

Scene 1 - “The Science is Settled”

Open with satellite video of the United States.

Camera quickly zooms into Atlanta, Georgia [honking horns, a dirty mask lays on the sidewalk]… and then New York City [man shouting at a maskless kid in a convenience shop, “Hey! Get! outta! Heea! You punk!”]… and then Gavin Newsom’s winery in California [peaceful music], a sign on the door reads “Yes! We’re Open!”… and then Knockemstiff, Ohio, where two men work on a ‘67 Chevy in a garage... a small greasy TV is cranked up for background noise.

Unisonic chants of “the science is settled” are heard blaring from millions of TVs, spanning across all major media outlets, in airports, nursing homes, and living rooms across America.

Zoom in on Charleston, South Carolina.

“The science is settled!” a man screeches at a provocatively maskless woman taking a walk by herself on a sunny and empty beach.

He reaches for his phone to dial 911.

“The science,” he repeats louder, this time mostly to himself as he quickly pulls his mask back over his nose and furiously rolls back up the driver’s side window of his tan and green Subaru sitting there, alone, in the empty parking lot, “is settled!”

(Come on. Admit it. You’d watch that movie!)

The Science is Settled

A recent article in the UK rag Byline Times warns of a rise in “fringe” views which claim further lockdowns aren’t justified.

In the “public health community,” the article reads, there is an “almost unanimous consensus.”

This consensus, says the article, states: “Managing this pandemic requires a suppression strategy, with restrictions and mitigatory measures, or an elimination strategy.”

On the other hand, the ‘fringe’ view states “that COVID-19 is not as serious as we have been made to believe, that ‘herd immunity’ is possible without huge costs, and that only the elderly and vulnerable get seriously ill.

“Such arguments,” the article ensures, “appear to rely on discredited narratives about increases in cases being false positives, or due to increased testing, and that deaths due to COVID-19 are low relative to other causes.”

“The narrative that these two views reflect a rift within the scientific community provides a false sense of legitimacy to what is a fringe view among scientists, espoused largely by individuals who do not work in this area.”

Rise of the “Fringe Opinion”

For months, of course, we’ve watched as such “fringe” voices have been sidelined in favor of those who don’t try to rock the boat.

It’s no secret that, along with the mainstream media, Big Tech has taken it upon itself to be the arbiter of allowable opinion.

On April 23, in the most blatant example, Youtube CEO Susan Wojcicki announced that Youtube would remove any content which contradicted the World Health Organization on COVID-19.

And the whack-a-mole censorship hasn’t slowed down. The banhammer is constantly on the ready for those who happen to hold the ‘wrong’ opinion on COVID-19.

And, indeed, there’s been a concerted effort to label anything which contradicts the mainstream narrative as “fringe” -- despite a growing number of physicians fighting to have their voices heard.

Along this vein, a group of established health experts in Toronto have just pushed back against any further lockdowns by publishing an open letter to Premier Ford.

The sense of urgency in the letter, which we’ve printed in full below, is palpable.

Ford, after all, has already made his intention clear -- a second wave shutdown is on the way. (In fact, he even singled churches out in one instance, warning them that another lockdown of churches is imminent.)

In response, the “fringes” are rising up.

Randy Hillier, a member of the Provincial Parliament, has asked the Health Minister some (very) interesting questions about the PCR tests, to which, as you’ll see in the video below, the Minister avoided completely for one of two reasons.

A] Because she simply didn’t want to answer the questions…

B] She didn’t actually understand what he was asking. 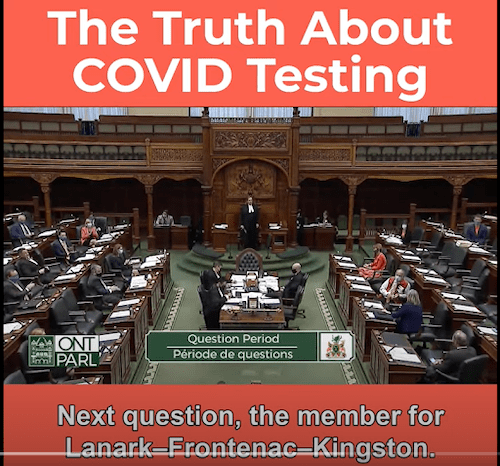 “I've been receiving a number of emails lately,” Hillier also wrote this week, “from family doctors across the country who are increasingly of this opinion, that shutdowns are not worth the broader societal toll.”

Those opinions, of course, are nowhere to be found in the mainstream media. 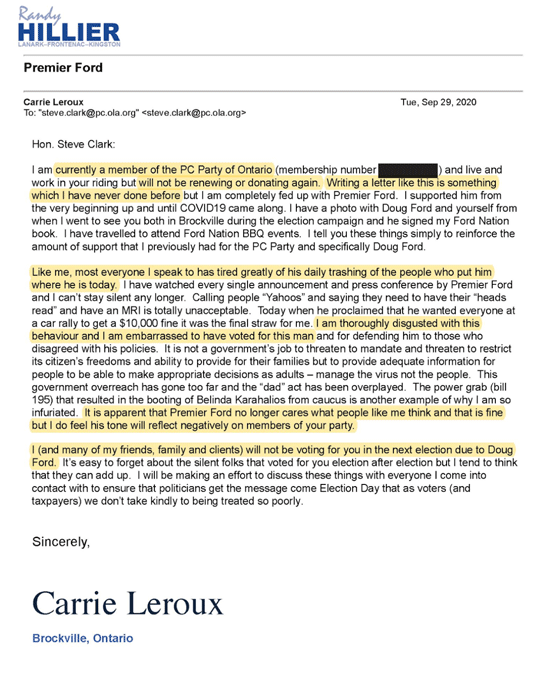 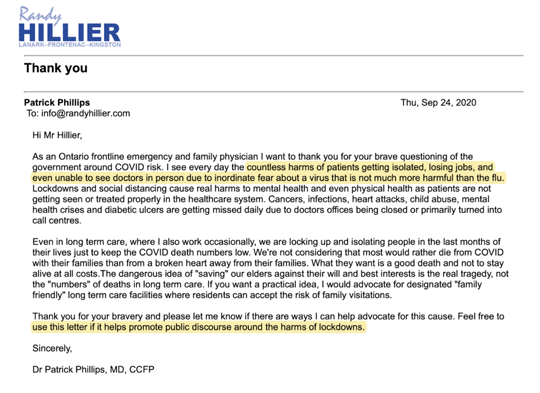 Which is why, on Sept. 27, the aforementioned open letter was signed and published by 20 doctors and professors of medicine and was sent to Premier Doug Ford.

The people who signed off on this letter are far from fringe. They hail from respected faculties like the University of Toronto, McMaster University, University of Ottawa and from hospitals such as Sick Kids.

We’ve printed it in its entirety below.

This week, we’re all about solutions.

So, what can you do?

Help to amplify those voices in your area that aren’t getting heard.

IDEA: Start interviewing/talking to physicians, doctors, public officials, and experts in your area that aren’t getting the airtime they deserve.

Get your finger on the pulse… see if it differs from what public officials are reporting.

Pull those “fringe” voices together.

Open Letter to Premier Ford:
“It’s time to do something different.”

We are writing this letter in support of the government’s plan to use a tactical localized approach, rather than sweeping new lockdown measures, to deal with the increasing COVID case numbers in Ontario.

Lockdowns have been shown not to eliminate the virus. While they slow the spread of the virus, this only lasts as long as the lockdown lasts. This creates a situation where there is no way to end the lockdown, and society cannot move forward in vitally important ways including in the health sector, the economy and other critically important instrumental goods including education, recreation, and healthy human social interactions.

In Ontario, the increase in cases at this time are in people under 60 years of age who are unlikely to become very ill. At the peak of the pandemic in Ontario in mid-April, 56% of cases were in those over age 60. Now in September, only 14% of cases are in over 60 year olds.

In Ontario and other parts of the world, such as the European Union, increasing case loads are not necessarily translating into unmanageable levels of hospitalizations and ICU admissions. This is not a result of a lag in reporting of severe and fatal cases. While we understand the concerns that these cases could spill into vulnerable communities, we also need to balance the actual risk.

As the virus circulates at manageable levels within the community, we need to continue the gains we have made in the protection of the vulnerable in long-term care and retirement institutions, and continue to educate other people about their individual risk, so that they can observe appropriate protective measures.

Lockdowns have costs that have, to this point, not been included in the consideration of further measures. A full accounting of the implications on health and well-being must be included in the models, and be brought forward for public debate. Hard data now exist showing the significant negative health effects shutting down society has caused. Overdoses have risen 40% in some jurisdictions. Extensive morbidity has been experienced by those whose surgery has been cancelled, and the ramifications for cancer patients whose diagnostic testing was delayed has yet to be determined.

A huge concern is the implication of closure of schools, and the ongoing reluctance we have seen in the large urban centres of sending children back to the classroom due to safety concerns. Global data clearly now show that children have an extremely low risk of serious illness, but they are disproportionately harmed by precautions. Children’s rights to societal care, mental health support and education must be protected. This cannot be achieved with ongoing or rotating lockdown.

The invitation and involvement of other health experts to advise the government’s response beside individuals in Public Health and Infectious Diseases in addition to leaders in the business, securities and arts communities is essential. We also call for increased open debate, in the public forum, that hears voices from outside the medical and public health communities, in order to consider all points of view from society.

This is a fundamental principle upon which democratic societies are built. All stakeholders should have an equal right to participation in public discourse when it comes to setting such fundamental and sweeping societal interventions.

All have the right to feel their voices have been heard, and moreover to ensure factual credible data is openly debated, in contrast to the personal and political slants that have had apparent significant impacts on the management of the virus to date.

Our society has borne enormous pain over the past six months. It’s time to do something different.

Anatomy of Propaganda: "There is No Getting Back to Normal"

Three ways to fight back against the fear mongers…

NFL Reveals How We Should Be Testing For COVID-19

The NFL is the only institution relying completely on science. Why? It’s simple. Skin in the game!

Is the worm beginning to turn? Or will the GBD get shot down?

The Philippines Proves the Obvious: Tyranny Doesn’t Save Lives

When you trade liberty for security, you get neither…

If you’ve ever dreamed of becoming an independent journalist, there’s no better time than now.