2030: Cronies Own Everything, They’ve Never Been Happier

Let’s take a rough tally just to see where we’re at.

As far as small businesses go, according to the data firm Womply: 21% were closed as of Nov.1; revenue for rest down 30%. Yes, there are a few small business owners, through sheer grit and ingenuity, who’ve fared pretty well this year. And kudos to them. But they’re in the minority. Many small businesses not already ground into the dirt will go extinct in our burgeoning second wave of lockdowns. And, of course, the economy is a habitat. When one business shuts its doors it has cascading “unseen” effects on other businesses, and the community-at-large.

That said, even if we were to agree blanket lockdowns are the best public health strategy for dealing with this virus (I, for one, do not), it still begs the question whether or not the government should have the power to put large swathes of people out of business with the simple flick of a pen.

After all, those calling the shots have less than zero skin in the game. The highest paid governor in America, Andrew Cuomo, after no shortage of backlash, had the luxury of deciding to graciously forgo his impending $25,000 raise in 2021. (We can only hope his book sales were enough to offset the loss.) As usual, the crony class remains protected, Main Street bears the brunt, and all of the risk is pushed onto the working-class. Again, we can argue whether or not this is the most effective strategy, sure, but District 9 is in the dumps and the Capital is getting rich. And that’s just the way it is. 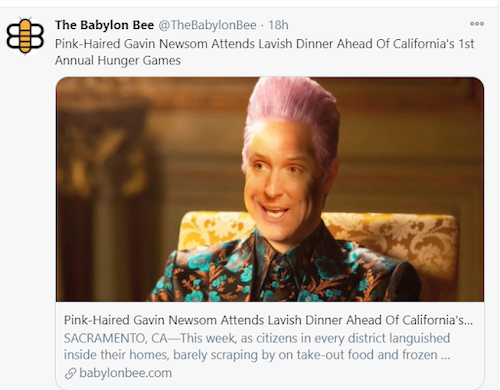 But don’t fret. According to the elites, there’s a light at the end of this long, dark tunnel. The Davos crowd’s got your back. And they promise to cancel all of your debts. Simply swear your fealty to Siri, give up everything you own, and accept your happy pod-like future.

In June 2020, during a virtual meeting hosted by the World Economic Forum, some of the planet’s most powerful business leaders, government officials and activists gathered together to talk about our current crisis. Strangely, however, none of it was about the current crisis. Few words were spoken about how we can confront the current COVID-19 crisis while preserving the average individual’s dignity, livelihood, civil rights, and humanity. Rather, it was to talk about what the elites planned to do after the COVID crisis had stripped all of those things away for good. (As they say, those who fail to plan, plan to fail.)

To name only a few of the superstar-studded attendee roll:

The central theme of the event was that the coronavirus pandemic has created an “opportunity” for those who reside in Mt. Olympus to remake the world in their image. Front and center of this was the proposal to “reset” the global economy. Instead of traditional capitalism, the high-profile group suggested the world embrace “stakeholder capitalism,” where, in essence, businesses are forced to run more like governments, acquiring more representative constituents (AKA, bureaucrats). In this world, nobody owns anything, but everyone holds a “stake”, all centrally-controlled and micromanaged by a consortium run, no doubt, by the biggest hearts and brains in the world… them.

Apparently, the idea isn’t so popular on social media. After an onslaught of hecklers, the World Economic Forum deleted a tweet this week which reads, “You’ll own nothing and you’ll be happy. This is how the world could change by 2030.”

Nevertheless, the plans are all-encompassing: “Every country, from the United States to China, must participate, and every industry, from oil and gas to tech, must be transformed,” wrote Klaus Schwab, the founder and executive chairman of the World Economic Forum, in an article published on WEF’s website. Schwab also added that “all aspects of our societies and economies” must be “revamped,” “from education to social contracts and working conditions.”

“To some,” says Didi Rankovic of Reclaim the Net, “this sounds like someone in Davos binge-watched Star Trek and thought it might be a good idea to attempt to transplant the space opera’s fictional tenets onto the real world. But others are concerned that dystopia and dispossessing people of their agency awaits at the end of that journey, rather than any kind of utopia.”

For those of us who support a market economy, and recognize the dangers of uninhibited centralized power, the Great Reset sounds like a Black Mirror-style technocratic dystopia. As Justin Haskins writes in The Hill, “Our current crony capitalist system has many flaws, to be sure, but granting more power to the government agents who created that crony system and eroding property rights is not the best way forward. America is the world’s most powerful, prosperous nation precisely because of the very market principles the Great Reset supporters loathe, not in spite of them.”

In reality, rather than ushering in the utopia, what we’re really facing up ahead in the short term is an economic death spiral the likes of which we haven’t seen in human history. This is why, back in January, our own Graham Summers sent an urgent letter (provided at the link below) to Trump, Pence, and Fed Chairman Powell to warn them what was coming.

At the time, of course, we had no idea just how prescient this letter would prove to be.

“The authorities,” he wrote, “failed to act on my warning. And today, we’re barreling towards a $7.4 trillion financial extinction event on January 15, 2021, that no one sees coming.” On this timeline, we could see economic destruction, social unrest, and much more chaos. Bankruptcies will go through the roof. Widespread bank failures will be the norm. Unemployment will hit record highs.

“These,” he tells us, “are the same tried-and-true methods I’m using to protect my family.”

Click here for the full letter, and much more, from our in-house macro maven Graham Summers.

Judy Shelton Blocked From Fed? Not So Fast…

And yet, despite all of the hemming, hawing, chatters and blathering… don’t count Shelton out yet.